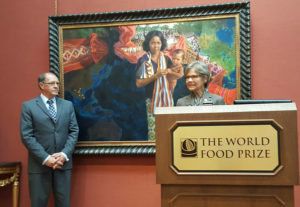 Two Iowans who’ve built a program in the state that’s helping fight hunger around the world are being honored by the World Food Prize organization.

“Foods Resource Bank has raised $47 million nationwide, impacting one million people around the globe,” Quinn said at a news conference Monday. Of that nationwide total, roughly $6.7 million has been raised by Iowans. The FRB program involves farmers who pledge the money generated from the sale of a portion of their crops. That money is then directed to food assistance projects in remote villages in 30 different countries.

Iowa is the leading state in the U.S. in terms of supporting FRB. De Weerd says more than 150 Iowa farmers are involved in FRB, along with around 1,000 volunteers.

“So, this award, I really say ‘thank you’ to the volunteers and farmers at FRB…and to the many organizations that helped us get going,” De Weerd said. The Iowa SHARES Humanitarian Award was established in 2013 in honor of former Iowa Governor Robert D. Ray. Monday was Ray’s 88th birthday. Iowa SHARES stands for Iowa Sends Help to Aid Refugees and End Starvation.