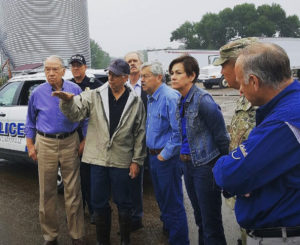 As Cedar Rapids residents hope for the flooding Cedar River to crest today, Iowa Senator Chuck Grassley is blaming the U.S. Army Corps of Engineers, at least in part, for the city’s second-worst flood.

Grassley says Cedar Rapids should have had significant federal funding years ago to build a protective floodwall, but the money hasn’t materialized because of failed Corps policies.

“They have a ratio that works out that puts Cedar Rapids on a lower priority for whatever money they’ve got to spend wherever in the country,” Grassley says. “There’s $73-million that should’ve been given to Cedar Rapids and that wouldn’t build much of a structure but it’d get you on the way to doing it.”

Iowa’s second-largest city was inundated by flooding eight years ago and federal dollars were promised to build a permanent levee system or floodwall. Lacking that money, nearly ten miles of temporary floodwalls were built in Cedar Rapids over the past several days and more than a quarter-million sandbags were set in place to protect thousands of homes and businesses.

“Wouldn’t it be better to figure that additional cost into structures and getting stuff built? They don’t seem to take those things into consideration,” Grassley says. “That’s my fault with the Corps. Now, if the Corps was talking to you, they’d probably say something like, ‘Get Congress to change the law.'” That may be a legitimate complaint, Grassley says, and the cost-benefit ratio may need to be reworked.

Grassley is joining with Iowa’s other U.S. Senator, Joni Ernst, in asking the Government Accountability Office to look into the funding formula being used by the Corps. Three of Iowa’s four congressmen have offered an amendment that calls for the Corps to make reviewing the Cedar Rapids project a higher priority. Republican Congressmen Rod Blum and David Young and Democratic Congressman Dave Loebsack hope to tack that amendment onto a budget bill that comes up for a vote in the House this week.