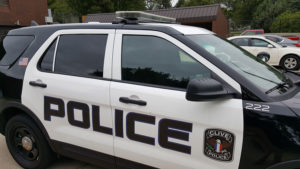 Police in the Des Moines suburb of Clive say two men who died in a shooting over the Labor Day weekend shot each other.

Clive Police Chief Michael Venema says investigators are running into road blocks, however, as they try to determine what led to the violence at the 7 Flags Events Center during the early morning hours of September 5.

“From the moment this investigation (started), it has been hampered by a lack of cooperation from witnesses and people directly involved in it,” Venema said at a news conference today. Twenty-nine-year-old Johnny Jackson and 45-year-old Kevin Hall, both of Des Moines, were killed in the incident.

Two other people were injured in the gunfire outside the venue where an “All Black Party” was being held. Around 250 people bought tickets to the event where guests were encouraged to dress in black. Venema said roughly 100 people were still at the event when a fight broke out inside the building and spilled into the parking lot. Investigators believe three guns were fired, two by Hall, but only Jackson’s weapon was recovered.

“Officers got almost no cooperation from any witness and during the time the officers were working to bring the scene under control, we believe at least two handguns were removed from the scene and disposed of,” Venema said. One of the few key pieces of evidence in the case involves surveillance video.

“Most of the video was near the front door, so we don’t really get to see a lot of the actual disturbance inside. We see the result of it – we see people being pushed out – but some people are less than forthcoming with what exactly happened to spark this,” Venema said. Although police believe the two people killed were the only two who fired weapons, there’s still a chance others could face charges in the case.

“There are people who were in the parking lot who were involved in fights and there were people involved in removing and disposing of critical pieces of evidence, so at this point, I’m not comfortable saying there will never be any charges filed,” Venema said.