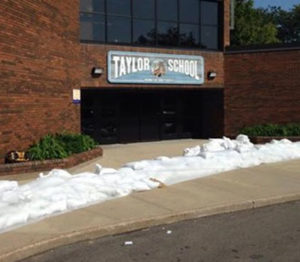 Students in the Cedar Rapids School District are out of school this week for the flooding and won’t go back to class until Monday.

District superintendent Brad Buck says transportation issues were the main reason they decided to cancel classes for the 16,000 students. He says Taylor Elementary was flooded in 2008 and is the only school directly in the path of the floodwaters.

“We went ahead an unloaded all the items in the first floor onto a couple of semis and took a couple of those things up to the second floor. We actually took the additional step of sandbagging the school in case water did make it that direction. It doesn’t look like that’s going to happen,” according to Buck. Buck says he is pleased that students and staff have not just been sitting around.

“We’ve seen a lot of activity from students and staff members doing volunteer work during this time. So we’re very appreciative that people have used this time away to be a part of the great solution that’s been underway in Cedar Rapids,” Buck says. While students will miss four calendar days of school, Buck says the district is on an hourly calendar that gives them flexibility in making up the missed time.

He says they have some extra time built into their calendar that is normally used for snow days, and he says they will not have to make up Monday, Tuesday and Wednesday. They will make up Thursday at the end of the school year. They already had a teacher in-service day scheduled for Monday where students would be off, and are moving that back to Friday.

“It’s pretty interesting that we only have two of those full-day professional development days in the entire calendar, and one of them happened to fall on Monday so we could immediately make up a day,” Buck says. The flooding forced some 5,000 people out of their homes and Buck says the district is working to help any students and families who may’ve been impacted.

“Our office of learning and leadership — they have reached out to principals — they’ve got spread sheets put together for families to report if they have been displaced and are now homeless or if there other needs they might have for counseling and support,” Buck says. “We are working to make sure all of those things are in place Monday for the start of school.” Buck says he is impressed with the way the school district community and the Cedar Rapids community as a whole have responded to the flood emergency.

“They have really come together in amazing and great ways and I think that is part of why we are ending up in the best spot we can be in a difficult situation,” Buck says. Buck is a native of Cedar Rapids who took over as superintendent of the Cedar Rapids school district in July of 2015 after leaving his position as the director of the Iowa Department of Education.