You are here: Home / Fires/Accidents/Disasters / Seepage a problem in Cedar Rapids, while flooded roads open again in Cedar Falls. 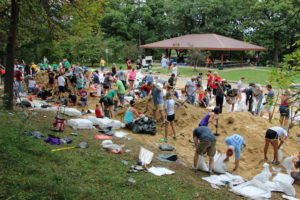 Volunteers helped fill sandbags in preparation for the flooding in Cedar Rapids.

Cedar Rapids city officials pulled back the evacuation zone around the Cedar River as the flood water is dropping. But police and National Guard troops continue restricting access near the river.

“We do continue to take on water behind the system from storm sewage from seepage through the berms and the Hesco barriers. The city currently has over 50 pumps up and running. We continue to man these 24-hours to make sure these pumps keep running and that we are able to get the water back into the river,” Winter says.

Winter says the downtown bridges will remain closed until the sand barriers are removed and the bridges pass inspection. Upstream on the Cedar River, most of the roads in Cedar Falls closed by flooding are open again. Public Safety Director Jeff Olson says the planning that was done after the 2008 flooding helped them do a better job managing things this time.

“We have a list of knowing of when roads are closed, when neighborhoods go under at certain levels cause we track those from the 08’ flood. So we just put together a flood plan after 08’ that tells us exactly what we need to do when the flood is predicted to go to certain levels. So that was very, very helpful for us,” Olson says.

Olson says the water level from the current flood was the second highest ever recorded in Cedar Falls. Olson says he hopes to have all 400 properties that flooded to be inspected by Friday.

Thanks to Iowa Public Radio.