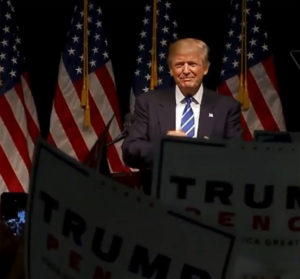 Republican presidential candidate Donald Trump spoke to a cheering crowd of more than a thousand supporters in Council Bluffs this afternoon, just hours before Thursday’s launch of “early” voting in Iowa.

“You need to start voting immediately,” Trump said, to cheers. “Don’t forget early voting. You have to knock on doors. You have to pick up that phone.”

The crowd inside the Mid-America Center in Council Bluffs joined Trump in reciting his campaign slogan. They cheered when he again promised to “build the wall” along the southern border with Mexico. They chanted “lock her up” when Trump mentioned his rival’s email controversy.

Trump briefly mentioned Monday night’s debate. He pointed to online polls taken afterwards. Trump argued the “corrupt corporate media” is ignoring his “landslide” victory in the event by focusing instead on a CNN poll.

Trump again questioned Clinton’s stamina and the days she to took from the campaign trail raise money, prepare for the debate and recover from pneumonia.

“Then she can’t even make it to her car. Isn’t it tough?” Trump asked, getting laughter from the crowd. “All those day offs. Right? Boom. Did you ever see her chart? She won’t be campaigning today…I’m campaigning and I’m saying: ‘What’s going on?’ Now in all fairness, she’s spending all of that Wall Street money on commercials, whereas I’m doing it the old-fashioned way, right? So you have six weeks to make every dream you’ve dreamed for your country come true.”

Earlier this afternoon, the Trump campaign released a list of Christian conservatives in Iowa who are backing him. Steve Scheffler, the president of the Iowa Faith and Freedom Coalition who’s on the list, is also a member of the Republican National Committee who cast his vote for Trump at the GOP’s national convention in July.

“My personal view of Hillary Clinton is she is a borderline evil person,” Scheffler said on Saturday. “She is a pathological liar.”

Scheffler told about 600 members of his group this past weekend that if Richard Nixon were alive today, he’d be owed “an apology” and “nominated for sainthood” because Clinton’s transgressions are worse.

Earlier today Hillary Clinton talked with officials from Cedar Rapids by phone, saying her “heart goes out to the families and businesses” affected by this week’s flooding and Clinton promised as president she’d work with Cedar Rapids leaders to erect new flood protection barriers along the Cedar River corridor.

Clinton is due to headline a midday rally in downtown Des Moines to mark tomorrow’s  start of early voting in Iowa. Democrat Tom Miller, Iowa’s attorney general, went to Council Bluffs today on behalf of the Clinton campaign to declare’s Trump’s “temperament” unfit for the presidency.