You are here: Home / Fires/Accidents/Disasters / Cedar River flood water not expected to shut down I-80 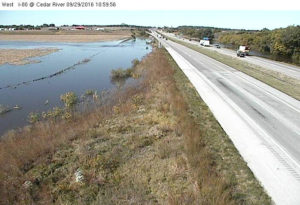 DOT camera shows the Cedar River along I-80 near the Tipton exit.

Iowa’s busiest east-west corridor will not be going underwater, despite the flood water moving down the Cedar River.

Cathy Cutler, a transportation planner with the Iowa Department of Transportation office in Cedar Rapids, says the floodwaters are falling in a key location near the towns of Atalissa and Moscow.

“We’re pleased to announce that Interstate 80 will remain open in Cedar County as it crosses over the Cedar River,” Cutler says. “River levels are actually dropping at this time so there’s no threat to the interstate.”

A stretch of the interstate had to be shut down during the flood of 2008 and traffic was forced to divert in a detour that took them across Highway 30, many miles out of the way.

“The water actually overtopped the interstate at that time due to the tremendous flooding that was happening so it had to be closed,” Cutler says. “Of course, that causes a great concern not only to local motorists but obviously, interstate traffic trying to go back and forth across Iowa and do commerce.” Many other roadways remain closed across eastern Iowa due to the high water, but this vital thoroughfare will remain open.

“Interstate 80 carries commerce to all points of the country,” Culter says, “so it’s really important to us to keep it open to the state and to the country.” She says Interstate 80 carries around 34,000 vehicles daily and about one-third of them are trucks. Find out about the roads that are closed by calling 511 or by logging on to www.511ia.org.