You are here: Home / Agriculture / Iowans to tout beef and pork sales in China and Japan (AUDIO) 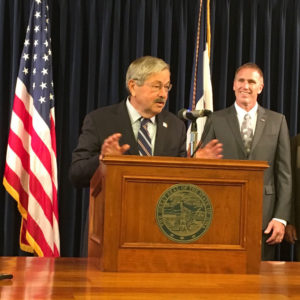 Iowa’s governor will lead a trade delegation to China and Japan next month, to tout Iowa beef and pork.

Chris Freland of the Iowa Beef Policy Council says the trip comes at a critical moment because China’s 13-year ban on U.S. beef imports has just been lifted.

“China is a fifth of the world population, so that makes for a great market opportunity with our beef products,” Freland says.

Short ribs and chuck rolls are a couple of the cuts of meat Freland expects to sell well in China.

“Last year, China imported nearly $2.3 billion dollars worth of beef,” Freland says. “Obviously they didn’t stop eating beef (in the past 13 years), but we want to be a partner in that game.”

There are nearly four million head of cattle in Iowa today, which makes the state the 4th leading U.S. producer of beef. Iowa is the country’s top producer of pork. Iowa Pork Producers Association president Al Wulfekuhle of Quasqueton says China and Japan are “important destinations” for Iowa pork.

“Japan has the largest value market for Iowa pork and has been a long-term customer for our high quality product,” Wulfekuhle says.

The volume of U.S. pork exports to Japan is down 12 percent this year, however, as the Japanese buy more pork from Europe.

“This trade mission comes at a critical time for Iowa pork producers,” he says. “We’re facing tough economic times. We have prices below the cost of production right now, so expanding the market for Iowa pork in China and Japan is a key part of bringing profitability back to our industry.”

About 25 percent of U.S. pork is typically exported each year, but Wulfkuhle says exports are down this year overall. He’d like to see the Trans Pacific Partnership ratified by congress, but the trade deal has stalled there. In addition, both Donald Trump and Hillary Clinton have said they’re opposed to the TPP.

Governor Terry Branstad says that means the deal will be renegotiated, regardless of which candidate wins in November. Branstad and the rest of the trade delegation will leave for the far east November 11 and return the 18th. Branstad, Freland and Wulfekuhle discussed the trip during the governor’s weekly news conference.

“This has been a passion of mine all the years that I’ve served and I want to do everything I can to try to break down those barriers, open up those markets and give Iowa producers an opportunity to market there in those huge markets in both China and Japan.”

Lieutenant Governor Kim Reynolds is currently on a trade mission to Argentina and Uruguay.