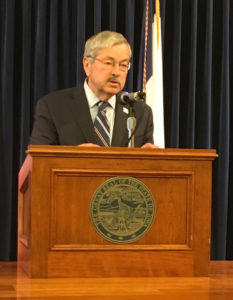 Governor Terry Branstad has declared 23 Iowa counties state disaster areas due to recent flooding. The governor expects some of those counties to qualify for a federal disaster declaration.

“I’ve seen enough damage to feel pretty confident we will get a presidential designation that hopefully will help those who are the hardest hit,” Branstad says.

“We’ll try to do that as quickly as we can because we know people are relying on this. I’ve already declared…23 counties disaster areas, so the state resources are available,” Branstad says. “But obviously there’s additional, substantial federal resources that we want to get access to as well.”

If the president declares an area a disaster area due to damage to public facilities, federal aide becomes available to fix roads, bridges and other public structures. If there is substantial damage to private property, additional federal aide would be available and Branstad says that threshold may be met in some areas.

On Friday, President Obama issued a disaster declaration to extend federal aid to the State of Iowa and eight Iowa counties to deal with the expenses from flash flooding and straight-line wind damage that occurred in late August. That federal disaster declaration covers Allamakee, Chickasaw, Clayton, Fayette, Floyd, Howard, Mitchell, and Winneshiek Counties.