You are here: Home / Fires/Accidents/Disasters / Pigs die in truck accident in Fayette County 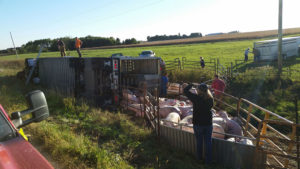 Some 60 hogs died when this semi rolled over into a ditch in Fayette County.

Dozens of hogs were killed in a semi roll over crash in northeast Iowa.

It happened Sunday afternoon south of Arlington on Highway 187. According to the Fayette County Sheriff’s Office, 45-year-old Scott Childers of Waucoma lost control of a semi tractor trailer and it rolled on its side in the ditch.

There were roughly 200 hogs in the trailer and around 60 were killed in the crash. Childers was not injured. He’s been charged with failure to maintain control.