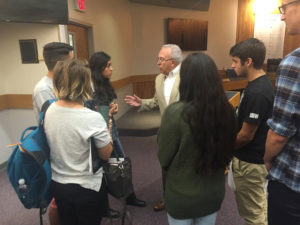 County officials in central Iowa who’re acting to raise the local minimum wage are getting criticized for the lower, “starter” wage for teenagers.

Polk County Supervisors have voted twice to eventually raise the minimum wage to $10.75 an hour by 2019 — for adults. The county’s ordinance allows businesses to pay workers under the age of 18 a base wage that’s 15 percent below that. Sixteen-year old Alexa Rodriguez, who testified before the Board of Supervisors Tuesday, said that’s not fair because she does the same work her older colleagues do.

“When there’s a spill in the aisle or when it comes to providing good customer service, I’m able to do all of those,” she said.

Des Moines resident Ashley Parker said she had to go to work at the age of 15 to support herself.

“I was working many nights and every single weekend because my mom who struggled with addiction wasn’t working,” she said, “and my father refused to help me.”

Polk County Supervisor Tom Hockensmith said the two-tiered wage proposal is the recommendation from a task force and is the result of plenty of compromise.

“Is it everything we wanted? Absolutely not,” Hockensmith said at Tuesday’s board meeting. “Is it a good start? We think it is.”

Michelle Hurd of the Iowa Grocery Industry Association said with that starting wage, employers can afford to hire teenagers.

“It is in the best interest of youth in our state to provide young people with first time job experiences,” Hurd said.

The Polk County minimum wage ordinance gets its third and final reading next week. Officials in three other Iowa counties have passed ordinances to raise the minimum wage at the local level.