You are here: Home / News / Former U.S. Representative Jim Leach will not vote for Trump 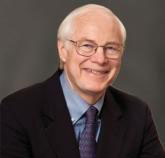 Former Iowa Congressman Jim Leach and 29 other former congressmen who are Republicans today  announced they will not vote for Donald Trump. Leach calls Trump “unfit” for the nation’s highest office.

“He mocks women. He mocks the handicapped. He offends our allies,” Leach said during an interview with Radio Iowa. “He praises dictators. He peppers his statements with falsehoods.”

Leach is particularly concerned about how Trump would handle foreign policy.

“I cannot think of anyone I would trust less,” Leach said.

Leach, who is a Davenport native, represented parts of eastern Iowa for 30 years in the U.S. House. He lost his bid for reelection in 2006. In 2008, he publicly endorsed Barack Obama. Today, Leach said he is still a Republican and he’s urging Iowans to re-elect Senator Chuck Grassley — but Leach said the Republican Party’s presidential nominee is “unacceptable.”

“This election it seems that both parties may have failed in their presidential search,” Leach said. “I, for one, have not decided who to support for president, but I feel obligated to express a view that I share with so many others that Mr. Trump would be a very dangerous choice.”

According to Leach, Trump has made a “mockery” of the Republican Party’s principles and values. And Leach expressed particular concern about what he called Trump’s “lack of civility” that Leach said is forcing Americans to be at “war against each other.”

Leach said the so-called “establishment has let the public down” and the case for change is real, but the kind of change Trump represents is “too dangerous,” according to Leach.

Leach was a professor at Princeton and Harvard after he left congress, then President Obama appointed Leach to be chairman of the National Endowment for the Humanities. Leach left that post in 2013. He’s now a visiting professor in the University of Iowa’s law school.

Jason Miller, a spokesman for the Trump campaign, dismissed Leach and the letter’s other co-signers as “insiders” with “gold-plated congressional pensions” who are “nothing more than lackeys of the failed political establishment.”