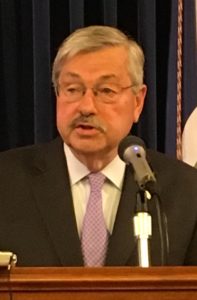 Governor Terry Branstad today said the president of Iowa State University “is not getting a pass” for using a university-owned plane for personal travel, but Branstad also is praising Steven Leath for his fundraising abilities.

“He’s been traveling all over the country, making calls, getting major contributions to Iowa State University,” Branstad said. “…That doesn’t excuse the mistake that he made…He’s indicated that he’s not going to be using Iowa State University aircraft in the future, but I also think you have to look at the whole picture.”

Branstad told reporters this morning he doesn’t know all the details of the situation, but Branstad indicated Leath “has reimbursed the university for use of the aircraft.” Leath has repaid the university $15,000 to cover damage done to the plane while Leath himself was flying it. However, Leath has not repaid ISU for using a larger university plane — flown by other pilots — to pick up his brother and sister-in-law enroute to and from a basketball game in New York City. Leath told The Iowa State Daily the trip had a business component and was a legitimate university expense.

Branstad said the Board of Regents is “doing a full review” of travel rules.

“I believe that the Regents is the appropriate governing body and that they are reviewing their policies and procedures to make sure that the use of aircraft and transportation is done appropriately at all three universities,” Branstad said during his weekly news conference.

Branstad in the 1980s sold a plane owned by the State of Iowa. Branstad says he did that because it was cheaper to fly commercial or drive than to pay for private pilots and upkeep of a state-owned plane. In 1977, the Iowa National Guard’s adjutant general was forced to resign for using military aircraft to fly out-of-state to visit his fiancé.