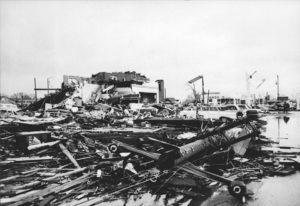 Today marks the 50th anniversary of the worst disaster to hit the north-central Iowa town of Belmond.

It was on October 14, 1966 that a large tornado struck the community, killing six people, injuring dozens and damaging or destroying 75 businesses and 600 homes.

Larry Turner was a community college student at the time and was walking through downtown Belmond when he spotted the tornado and ran for cover in a business.

Turner says, “I got in the laundromat and there were four or five women in the building at the time, they were all standing in the front and I told them, ‘You’ve got to get away from these windows, they’re going to explode,’ and we turned around and started away and about that time, the windows went.” 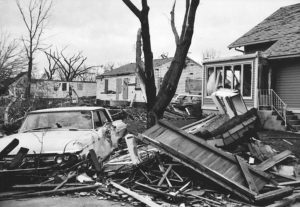 The tornado hit Belmond 50 years ago.

After helping pull people out of a neighboring movie theater, Turner headed home to find his parents’ house was still standing and his mother and siblings were fine. When Turner’s father got home, they both went to work helping to remove tornado debris.

“Our family was part owner in the gravel pit that was north of town so we went out and I brought a payloader into town and he went and got a Caterpillar,” Turner says. “I worked at pushing junk out of the way, clearing streets so they could get the ambulances out.”

An open house will be held from 2 to 4 P.M. today at the Belmond Historical Museum to mark the anniversary of the tornado. Photos and other memorabilia will be on display.