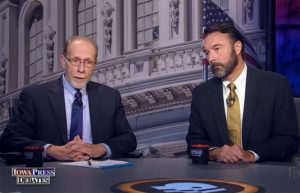 The two major party candidates in Iowa’s second congressional district met in a televised forum this afternoon and debated whether the U.S. military should be involved in Syria’s civil war, specifically, and the Middle East, in general.

“It’s not that a democracy cannot flourish in the MIddle East, but it has to develop on its own, internally,” Peters said. “It’s got to evolve from the bottom up. You cannot export it and drop it from a Black Hawk helicopter.”

“They are a threat to the United States. We know that,” Loebdsack said. “Now how far we go, what that balance is, is the question, but clearly there are threats there we have to take into account…We can’t simply retreat to our borders and hope for the best.”

Both candidates said they are opposed to sending U.S. combat troops into Syria, but Peters is also opposed to having U.S. fighter jets make bombing runs over the country.

“We need to step away from Syria, I think,” Peters said. “I’m really worried about the movements there.”

Loebsack said the U.S. has an interest in stabilizing Syria and that’s why the president has authorized not only aerial bombing, but military advisors on the ground.

“I think we have to be very careful that we not get further involved in that sense,” Loebsack said.

Loebsack and Peters discussed a wide range of other issues. They differed sharply on gun rights. Peters says current gun laws are adequate. Loebsack supports a law that would bar those on the terror watch list from buying a gun.

“We have to keep guns, weapons, out of the hands of the bad guys who want to do us harm,” Loebsack said.

Peters responded: “If people are a terrorist, why are they out on teh streets at all?”

And Peters said there are constitutional concerns with the so-called “watch list” because some people have been placed upon it in error.

The hour-long event was livestreamed on Iowa Public Television’s website at 1:30 p.m. and will be rebroadcast this evening at 7 o’clock.