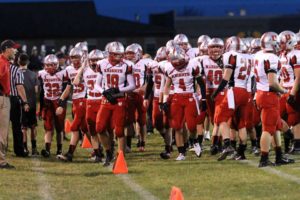 There have been a number of big games in Class 2A District 4 this season. None will have more impact than tonight’s collision between top ranked North Fayette Valley and second rated Union (LaPorte City). The Knights would clinch the district title with a win.

“You are looking at a guaranteed home playoff opportunity in round one and the district title on the line so it is a big game”, said Union coach Joe Hadachek. “We are not trying to tell the kids to treat it like any other game because it is not. It is for the district title and you are going to have to play up a notch in this game.”

North Fayette Valley may not be able to clinch the district title with a win. The TigerHawks close the regular season next week against a Waukon team that has only one district loss.