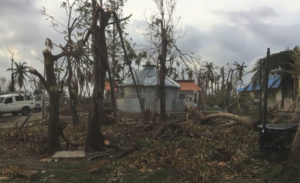 An Iowa missionary who works in Haiti says the recovery from Hurricane Matthew is going to be much different that it was from the earthquake that hit the county.

In a video interview from Haiti, Les DeRoos of Laborers With Christ, talked about the situation there. “When the earthquake took place, it took place where there was a high population, but the breadbasket of Haiti was really not affected a whole lot,” DeRoos says. “So a lot of the things in our area were going to Port au Prince to help agricultural production and supply.”

The hurricane hit the key areas where rice and other crops are grown. “That’s all been decimated and Port au Prince is looking fine. I’ve heard they really didn’t have any impact other than a little wind — but the structure agriculturally is gone,” according to DeRoos. He says they are bringing in some food, but says they could use some money for food and other supplies they need to purchase.

DeRoos says the inflation rate has already been a big problem in Haiti and he expects that to continue in the aftermath of the hurricane. “It’s going to jump dramatically, so having the funds to help purchase those things, having the funds to cover the costs of the projects where the girls and boys and widows and orphans and abandoned babies are going to need sustenance and the need to provide for the additional cost of buying food to replace what we either would have raised or purchased at a reduced price is certainly going to be beneficial,” DeRoos says. The need for help is widespread.

“Every community needs help. It’s a scary situation to look at the level of need out there and how there’s going to be an opportunity to meet some of that need,” DeRoos says. The earthquake hit in 2010 and many of the recovery efforts since then were set back by the hurricane. DeRoos says it has been tough on the people there.

“We’ve had some Haitians tell us they think Haiti is finished over this,” DeRoos says, “they just say ‘Haiti won’t recover, Haiti’s finished.’ I’m not in that camp. We serve a big and might god. He loves the people of Haiti.” DeRoos works with GoServ Global, which is headquartered in Eagle Grove, Iowa.