You are here: Home / Human Interest / Pumpkins still have plenty of uses after Halloween 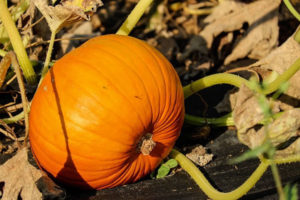 Halloween was a week ago and the pumpkin push is over in Iowa. If you can still find some of the seasonal orange gourds at the grocery store, one expert says consider making a pie from the actual vegetable instead of buying it canned.

U.S.D.A. crop specialist Dave Horner says be sure and buy the right variety of pumpkin for baking.

“What they call the pie pumpkins or the sugar pumpkins, they’re the smaller pumpkins,” Horner says. “The bigger pumpkins can have up to 90% water in them, so sugar-pie pumpkins. They cook better. When you open them up, they’re easier to clean out, they have less water, less stringy, firmer flesh and they hold up better in your pies. The bigger pumpkins are more for decorating.”

Besides pumpkin pies, Horner says there’s pumpkin bread, pumpkin cookies and even pumpkin smoothies to be made for the Thanksgiving and the holiday seasons. To store the ingredients longer, consider pureeing the pumpkin.

“They can put it in a Mason jar and freeze it that way and it can keep up to 9 or 12 months, depending on how cold your freezer is,” Horner says. “Most people cook the pumpkin first before they puree it. You can take a scoop and make little chunks and put them on a baking sheet, then freeze them and after they’re frozen, take the chunks and put them in a freezer bag so they don’t stick to each other.”

Now is a great time to stock up on pumpkins for eating or for Thanksgiving decorations as most varieties are marked down. “Ninety percent of the pumpkins in the United States for fresh market are sold in October,” he says. “After Halloween, they begin to disappear and you can really buy them on sale.” If you want to decorate for Thanksgiving, there are many varieties available in colors well beyond the traditional orange, including yellow, red, white, blue and green.