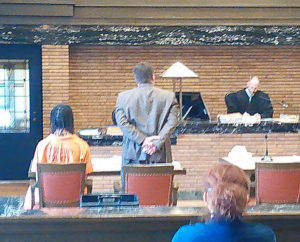 Isaiah Mothershed at his sentencing.

A Sioux City man was sentenced to up to 50 years in prison on six charges that included two attempted murder and a first-degree robbery charge.

Moritz made a statement prior to the sentencing.”I find myself struggling with the reasoning that was going on in his head when he decided to pull that gun out and kill me. Because he hates cops? Was he trying to make a name for himself? Nobody will ever know,” Moritz says. “What concerns me is his complete disregard for human life and completely selfish way he chooses to live. I don’t feel that he will ever contribute anything that will be to acceptable to society based on the six charges he was convicted of.”

Mothershed’s father Theodore spoke about how Isaiah’s mother died of cancer and how Isaiah was raised by his grandmother because he was often away working. Isaiah Mothershed gave a short statement before being sentenced.

“I guess I would just like to say that God knows the truth,” Mothershed says. Judge James Andreasen sentenced Mothershed to two consecutive terms of 17-and-a-half to 25 years in prison, combining the two attempted murder counts and four robbery counts.

“In reaching this sentence, the court does believe that this sentence provides the maximum opportunity for rehabilitation of Mr. Mothershed while also protecting the community against further offenses,” Andreasen says.

Andreasen denied motions from Mothershed’s attorney for acquittal and a new trial.