You are here: Home / News / Raccoons numbers up this year in Iowa 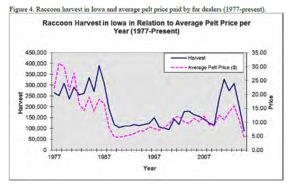 Good weather conditions have led to healthy populations of animals trapped in Iowa for their fur.

DNR furbearer biologist, Vince Evelsizer, says one animal in particular has flourished. “Raccoon numbers are especially high this year. All populations of the furbearers are stable to slightly increased this year, doing well and fine — except for the gray fox is a little bit low,” Evelsizer says. He is hoping trappers will help manage the raccoon population.

“Raccoon numbers are extremely high, so we encourage plenty of trapping and harvesting of them,” according to Evelsizer. He says trappers should be aware that there has been some distemper in raccoons. There are some signs the animals may be infected.

“They may encounter raccoons out in the daylight moving around, usually seem to be kind of stumbling or staggering around oblivious to their surroundings,” Evelsizer says. “If they encounter them, it’s good to go ahead and dispatch them.”

Evelsizer says you should take a few precautions for animals which might be infected.”Handle them with gloves and just use common sense when handling them. It has not been found to transfer to humans,” Evelsizer says.

Information from the DNR shows the raccoon harvest has varied greatly depending on the price paid for their pelts. The harvest hit an all-time high of 390,877 in the 1986-87 season, but that declined rapidly in the next three years to 103,468 as fur prices dropped. The harvest went back up in the 2010-2011 season to nearly 237,000 as pelt prices increased, but dropped off to 89,000 last year as the fur prices dropped again.

The average raccoon pelt price last year was $4.53, which was about half of the year before.