You are here: Home / News / Iowa DOT can’t keep up with an ‘exponential rate’ of staff cuts 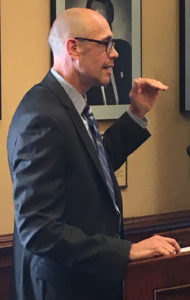 Sixty-seven full-time job vacancies at the Iowa Department of Transportation will not be filled in the coming year, but DOT officials are asking the governor and legislators to set aside $6.2 million to cover pay increases as well as higher insurance costs for employees who are still on the payroll.

But Lowe says the agency cannot easily cover the cost of negotiated pay and benefit hikes, so that’s why the DOT’s proposed budget includes additional money for those items. Last spring, Republican legislators balked at a similar request from DOT, since all other state agencies are forced to absorb those costs.

Lowe says the DOT needs the “adjustment” of more money so it can offer the level of services Iowans expect, things like clearing snow from roads and issuing driver’s licenses.

“We have very, very public-facing and impactful services that have to happen every day,” Lowe says. “…There comes a point at which you can’t get smaller without breaking those things and I think that’s one of the things that happened last year. As you start to put that in that crucible, it finally breaks. You finally can’t keep up with an exponential rate of reduction.”