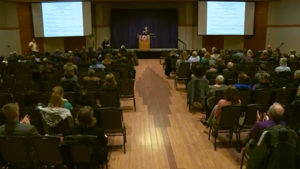 Montana State University chancellor Mark Nook made his case for taking over as the new president at the University of Northern Iowa Thursday.

Nook says higher education has been questioned recently as people ask about its value. “There is a value proposition, a public good to higher education that has been lost in a lot of the conversation. And as a public institution we have to step up — especially the leaders, Nook says. He says the value of a liberal arts education itself has also been questioned, but he says it’s the type of education that employers want their prospective employees to have. 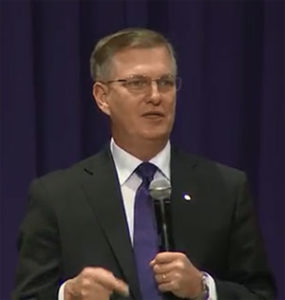 “What they really need is they need somebody that can communicate effectively to clients and can communicate effectively to colleagues,” Nook says. “They need people who can work together in teams. They need people who have critical thinking skills that really know how to solve problems that they have never seen before, that aren’t in their area of education.”

Nook says UNI and other schools need to continue to provide students a diverse education in what they teach, and tenure is one tool that helps faculty do that.

Nook says UNI is different from others schools because it is not student centered, it is student success centered. “We’re focused on their success. And not just in their educational pursuits, their professional career and their personal life. And building a sense of community beyond out borders. It’s about what we do with our community,” Nook says.

Nook is the last of the three finalists to visit the campus. The Board of Regents is expected to chose one of the three to be the next president at their meeting on the Cedar Falls campus next week