You are here: Home / Sports / No. 25 Iowa State looks to extend dominance over Hawkeyes 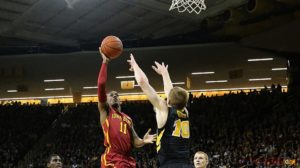 The Cyclones have won six of the last seven against the Hawkeyes.

Iowa still has a commanding lead in the series but Iowa State has dominated recent history and the 25th ranked Cyclones are heavily favored to make it seven of eight when the teams collide in Iowa City Thursday night.

The Hawkeyes are 5-5 and in their five losses gave up an average of 91 points. Fran McCaffery needs to find a way to slow down coach Steve Prohm’s Cyclone squad that is averaging more than 85 points per game.

“The thing that has impressed me the most about his team is they share the ball”, said McCaffery. “Any team that is going to be good shares the ball.”

“They are averaging more than 87 points per game and they have played a good schedule”, said Prohm. “They can score so our defense is going to have to travel over there.”

McCaffery calls this the best non-conference rivalry has been a part of. This is Prohm’s second year at ISU but it did not take him long to discover what this rivalry means.