You are here: Home / News / Reynolds says she’s learned ‘from the best governor in the nation’ 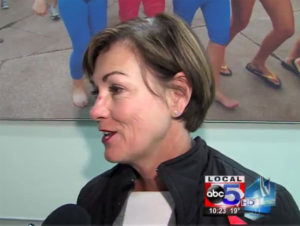 Iowa’s next governor says she has prepared for the responsibilities ahead.

A reporter and photographer for a central Iowa television station staked out the Des Moines airport last night, catching Lieutenant Governor Kim Reynolds as she returned from a family vacation in Mexico. Reynolds was interviewed live on the “Local 5 News” at 10 o’clock on WOI Television.

“It’s great to be back in Iowa and I’m really, really excited and proud of Governor Branstad — first of all — for this new assignment and this new role,” Reynolds told WOI.

State officials have not announced when the transfer of power from Branstad to Reynolds will occur. Branstad must win confirmation from the U.S. Senate for his new posting in China. That senate vote would take place sometime after Donald Trump is sworn in as president on January 20th. Both Branstad and Reynolds are expected to appear with Trump tonight at Trump’s “Thank You Tour” rally stop in Des Moines.