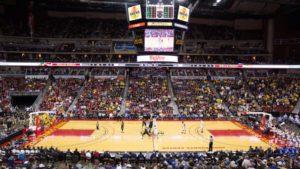 Hawkeye senior guard Peter Jok is the reigning Big Ten Player of the Week. The Des Moines native is averaging nearly 24 points per game and more than six rebounds. Panther senior guard Jeremy Morgan was named the Missouri Valley Player of the Week after pouring in a career-high 38 points in a win over North Dakota. The Iowa City native is averaging more than 18 points and seven rebounds.

“I think there’s going to be times when they will be guarding each other, and times when they won’t be but both are having spectacular seasons”, said Iowa coach Fran McCaffery. We knew they would both score but they are both doing so many other things in other areas to help their teams and that’s kind of who they are.”

Jok is shooting better than 40 percent from three point range and Northern Iowa coach Ben Jacobson says the key will be to limit his open looks.

“Our feeling has always been do what you can to make it as hard as possible”, said Jacobson. “With a guy like Peter you don’t want him getting a lot of good looks so that will be our challenge.”