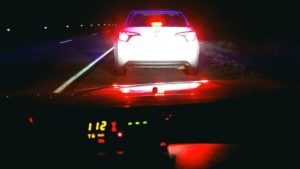 The Iowa State Patrol has cited “excessive speeding” as a factor for a sharp rise in traffic fatalities this year. Now, the agency is offering a fresh example.

The patrol posted a photo to Facebook today showing a Trooper clocked a driver at 112 miles an hour late Wednesday in Dallas County on Interstate 80.

Nearly 400 people have died in traffic crashes on Iowa roads this year, the most since 2008. Iowa State Patrol Sergeant Nate Ludwig told Radio Iowa one reason for the increase is an uptick in motorists who are speeding. “We’re not talking barely speeding, this is 80 or 90 miles an hour,” Ludwig said.