You are here: Home / News / Branstad: state isn’t in a position to cut income taxes now 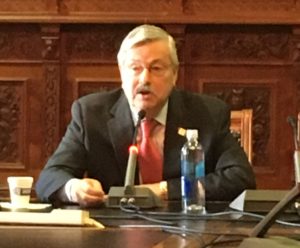 Governor Terry Branstad has a message for his fellow Republicans in the legislature: 2017 is not the time to cut state income taxes.

“I think it can be done in future years with a better economy, as we did in 1997,” Branstad says. “But, at this point, I don’t think we’re in a position to do it right now.”

Branstad is entering his 22nd year as governor, but he’s only had a Republican-controlled legislature for two of those years. At the beginning of that two-year stretch — back in 1997, Branstad did propose and approve a 10 percent across-the-board income tax cut.

“Those were significant accomplishments that we’re certainly very proud of,” Branstad says. “But that was a different economic time and the state had a significant surplus or balance. That’s not the case right now, so I think we have to be cognizant of the financial circumstances the state is facing.”

Branstad says he tried to fashion a tax cut package, but just couldn’t come up with an option that both provided “meaningful” tax relief to Iowans and would collect enough tax revenue for state government operations.

Republicans in the legislature are unwilling to rule out tax cuts in 2017, however. Bill Dix of Shell Rock is the Republican who will be in charge of the Iowa Senate’s debate agenda starting next week. Dix says “everything is on the table” because voters want changes in how the state does business.

Dix, who will be the Senate Majority Leader when the 2017 legislature convenes Monday, says taxes are a “key factor” in luring new residents to the state and keeping current residents here.

“Our tax policy should be simpler, should be more easily understood and should reflect the values of hard work and investment — and punishing them less,” Dix says.

In the past few years Republicans in the House have embraced a “flat tax.” House Speaker Linda Upmeyer, a Republican from Clear Lake, isn’t ready to say House Republicans will endorse a “flat tax” in 2017.

“Certainly I think people can agree that we need simpler taxes,” Upmeyer says. “Iowans fill out a tax form that’s similar to a federal tax form.”

Upmeyer says it means most Iowans have to have an attorney or a C-P-A do their taxes. And Upmeyer says the simple, single rate “flat tax” on income could shrink the Iowa tax form to the size of a postcard.

Upmeyer, Dix and Branstad made their comments this morning during the annual Associated Press Legislative Seminar at the statehouse.