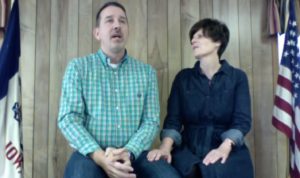 The next election isn’t until 2018, but Iowa has its first “official” candidate for governor.

“Get ready because this is going to be a campaign like no other you’ve seen,” 52-year-old Rich Leopold, a Democrat from Huxley, said today during the Facebook live broadcast that launched his campaign.

Leopold served as director of the Iowa Department of Natural Resources during Chet Culver’s term as governor and has worked as a field conservationist at various levels of government.

“I’m a professional. I’m a scientist by trade. I’m not a legislator. I’m not a politician,” Leopold said. “I’m actually a doer. I get things done by bringing people together.”

Leopold said today he’s not “into pointing fingers,” but his core message is that Iowa “needs an outsider” as governor.

“I think that Iowans deserve a governor that has some backbone and character,” Leopold said. “Now, politicians, they talk a lot. They form a committee. They offer some tired excuses. They wait for the next election cycle and nothing changes. I say: ‘Let’s change this. Let’s do this. Let’s take care of our own.'”

“So we want all these people to move to Iowa to help us when we have some of the filthiest water in the country,” Leopold said.

Iowans are willing to pay taxes to clean up the environment, he said, if the government-led effort is “effective, efficient and results-driven.” Leopold promised to pursue “common sense” policies that yield “a different kind of government.”

“Right now what we’re getting is a lot of animosity and half-measures,” Leopold said, “just picking at the edges, but not really getting things done.”

Leopold is currently director of Polk County Conservation. Leopold may be the first, but he won’t be the last Democrat or Republican to enter the 2018 race for governor. Republican Kim Reynolds will be governor when Terry Branstad resigns to become the U.S. Ambassador to China and Reynolds has made it clear she intends to run for reelection. She announced today she’s raised $1.1 million for the campaign. Cedar Rapids Mayor Ron Corbett has signalled he is likely to challenge Reynolds in a GOP primary. On the Democratic side, Andy McGuire, the outgoing chairwoman of the Iowa Democratic Party, and Senator Rob Hogg of Cedar Rapids are among those considering the prospect of running for governor in 2018.