You are here: Home / Fires/Accidents/Disasters / Monday morning served up on ice across Iowa 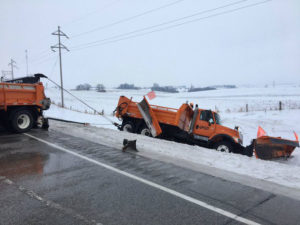 The ice even caused problems for DOT trucks trying to treat the highways.

Ice-covered tree limbs are snapping across a wide section of Iowa, causing hundreds of power outages.

An Ice Storm Warning is posted for much of western and central Iowa, stretching as far east as Waterloo. Meteorologist Brad Small, at the National Weather Service bureau in Johnston, says that layer of ice is making travel very slow-going.

“It’s pretty widespread across the central and southern two-thirds of the state with ice accumulations anywhere from a tenth to a quarter-inch or more,” Small says. “It’s pretty widespread with that first round overnight and unfortunately, we have another round of heavier rain moving through the state from south to north this morning as well.” State and local crews are spreading sand, salt and brine on the roads, feverishly working to make those thoroughfares passable, but the elements aren’t cooperating. 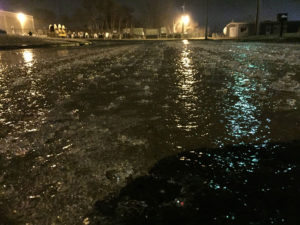 This ice photo was posted on the Ames city website.

“Air and road temperatures are hovering right around the freezing mark, plus or minus a degree or two,” Small says. “There will be some melting today but unfortunately, with this additional rain, we could see additional accumulations of ice. Temperatures for highs will only be the mid-30s at best and that’s only over southern Iowa.” Tuesday morning’s commute should be much better, Small says, as the road crews will have had a full day or more to combat the sheets of ice.

“Tomorrow, there could be some minor melting but the good news is, we don’t have any precipitation in the forecast into mid-week,” Small says. “We may actually see highs in the 30s and 40s and possibly even 50 or more by Thursday.”

Power outages were worst in the Des Moines metro as MidAmerican Energy reported nearly 2,400 customers had no electricity earlier today, though the utility say most are now back online.