Legislators at the subcommittee meeting on cutting state funds for Planned Parenthood.

The bill that cleared a senate subcommittee early this afternoon would no longer allow Iowa Medicaid patients to get contraception, cancer screenings or reproductive health tests at Planned Parenthood. Medicaid patients would be required to go to other clinics for those services. 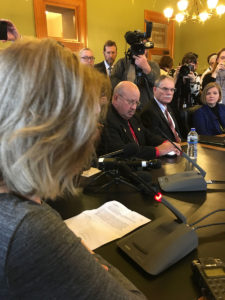 Republicans at the state and national level have made “defunding” Planned Parenthood a priority. Joan Thompson of the Iowa Catholic Conference urged legislators in Iowa to make that move.

“The conference supports this bill because it redirects government health care funds away from abortion providers,” Thompson said. “We believe that life is sacred and a fundamental right and abortion is a direct assault on the lives and dignity of women and children, and a rejection of our obligations to one another, particularly to the poor and vulnerable.”

“Without a trusted provider they can rely on for care, teens will face the dilemma of trying to find birth control in their hometowns,” she said. “They may be afraid to go to clinics 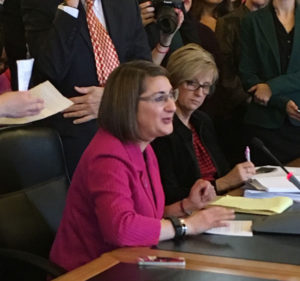 Suzanna de Baca of Planned Parenthood of the Heartland.

which they feel will share information with their parents or who may not respect their decision to be sexually active and may intimidate them from using birth control.”

The hearing room for the discussion of this bill was crowded beyond capacity. Dozens of people jammed hallways and staircases behind the senate to protest. 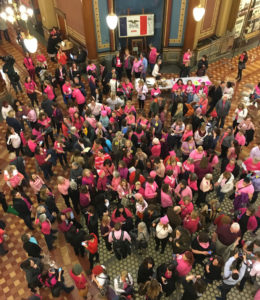 Supporters of Planned Parenthood stream into the State Capitol for the hearing.

“Where are the legislators?” the group chanted as they gathered in the statehouse rotunda. “This is what democracy looks like.”

Some of today’s protesters — like Ali Babcock of Ames — were wearing pink hats — the same hats worn at the capitol this past Saturday for the massive women’s march.

“It’s very positive and it’s very important to everyone that’s here,” Babcock said, as women in the crowd around her continued to cheer.

During the subcommittee meeting, Jennifer Bowen of Iowa Right to Life praised the legislators who back the bill.

“We recognize that this opportunity provides more women more choices and so we’re very thankful for you,” Bowen said.

Governor Branstad has said he’d sign the legislation and Senate Republicans have said this bill is one of their top four priorities. The next stop for debate on this proposal is a senate committee.