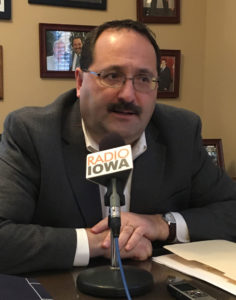 The Iowa Republican Party’s governing board has unanimously voted to reelect Jeff Kaufmann as party chairman for another two years.

Kaufmann, a former state legislator from Wilton, has held the job since the middle of 2014.

He’s set a goal of raising a million dollars as quickly as he can this year to prepare for the 2018 election.

“You probably figured out already I’m extremely competitive and I like to win and we’ve had some very good luck lately,” Kaufmann told members of the Iowa GOP’s state central committee late this morning. “And one of the things I want to win is the battle against complacency because it’s very easy to start feeling good right now.”

“I mean I could fly in with a cape with blue tights…and I’m not going to turn Iowa City to voting even 40 percent Republican,” Kaufmann told reporters during a news conference this morning. “…I think what we have to do is look for ways where we can run up our total.”

To have a shot at beating Loebsack, Kaufmann said the Republican challenger must win areas where Donald Trump did surprisingly well in 2016.

“I call ’em Truman Democratic strongholds,” Kaufmann said. “…Trump won Wapello County big. Trump won Lee County. If we can somehow continue to run up the totals there, I think we can be very competitive.”

Kaufmann took over the party two and a half years ago when it was nearly bankrupt and preparing to host the 2016 Iowa Caucuses after a controversy with the 2012 Caucus results. Today, Kaufmann promised members of the Iowa GOP’s state central committee that he’ll be an “aggressive” leader for the next two years.

“I’m going to continue to be blunt,” Kaufmann said. “…If there are people I believe that do not have the best interests of this party, even if they are fellow Republicans, I’m going to say it. I’m not going to back away from those kind of things…I’m going to be very aggressive towards Democrats if I see them saying things that are not correct and quite frankly, if I see shenanigans from the media, I’m going to call them out, too.”

The Iowa Democratic Party’s state central committee elected a new chairman last weekend. Thirty-three-year-old Derek Eadon is a political consultant who worked on both of Barack Obama’s campaigns in Iowa.