You are here: Home / Sports / With Jok ailing Ellingson steps up for Iowa 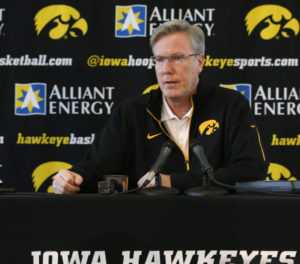 With Peter Jok struggling with a back injury the Iowa Hawkeyes could use consistent production from sophomore Brady Ellingson. With Jok on the sideline Saturday Ellingson scored 17 points, including 5-of-7 from three point range in a win over Ohio State.

“The thing that will happen to him as we move forward is teams are going to get up and guard him”, said Iowa coach Fran McCaffery. “But I think in terms of his aggressiveness to look for his shot and recognize that he has the capability every night to impact the game was a big step for him and for us.”

McCaffery said a decision on Jok’s status for Tuesday’s game at Rutgers will be made following Monday’s practice.

Rutgers is 1-8 in the Big Ten but McCaffery says the Scarlet Knights are making progress under first year coach Steve Pikiell, especially on defense.

“They have got size and quickness”, added McCaffery. “They play together and that is the critical thing for any defensive team.”