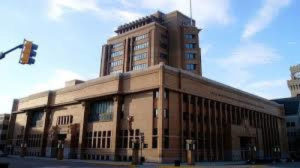 Iowa’s court system will close for a day this spring to help close a $400,000 budget gap.

Iowa Court Administrator David Boyd says clerk of court and other offices will be closed the Friday before Memorial Day, and 1,446 judicial employees will not be paid.

The administrator of Iowa Judicial District 3, Leesa McNeil, says her staff has been working short handed for months because of the budget deficit.

She says they had already made plans to not fill vacant jobs because they didn’t have the funding. They already have 10 positions and a judge’s position that have not been filled and she says they will now have additional positions left open. Judges and magistrates will work that day with no pay cut, but McNeil says court clerk offices will be closed:

The May 6th furlough day only covers the deficit through June 30th. McNeil says the current proposed state judicial budget will be three million less that it is now once the new fiscal year starts on July 1st.

McNeil says the way the system operates it is unlikely they will get any more funding in the new fiscal year. The shortfall is a result of cuts the Iowa Legislature is poised to approve and send to Governor Terry Branstad. Branstad says he respects the court’s staffing decision and hopes no jobs will be lost. The adjustments were drafted after revenue forecasts for the fiscal year came up lower than expected.