You are here: Home / News / Service offers a ride for you and your car if you drink too much 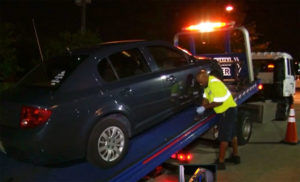 A new service is being launched in Iowa this Super Bowl weekend that offers anyone who’s had too much to drink a free ride home in a tow truck as their vehicle is carted along behind.

Kevin Bakewell, vice president of AAA, says the Tow To Go program will be available to Iowans anytime Friday through 6 A.M. on Monday by calling a toll-free number.

“It is a confidential phone call,” Bakewell says. “We do not take information on your name. We simply take your location, the location of your vehicle. It doesn’t matter whether or not you’re a AAA member. We will come out and pick up you and your car and take you safely home within a 10-mile radius.”

Before this weekend, the program was only available in Georgia, Florida and Tennessee, as well as in Omaha and Lincoln, Nebraska. It’s now being rolled out for all of Iowa and Nebraska.

“It’s an opportunity for a safe ride home for those who may not have planned ahead with a designated driver, recognizing that Super Bowl is one of those big, celebratory holidays where there tends to be a lot of drinking,” Bakewell says. “This is a way people can ensure a safe ride home for themselves, for their friends, and ensure safer highways for all of us.” Super Bowl weekend is the first of ten holiday weekends when the service will be offered in Iowa.

Since the program was first launched in 1998, the motor club says Tow To Go has safely removed more than 24,000 impaired drivers from roads across the Southeast and the Midwest. Bakewell isn’t putting a dollar figure on each tow.

“It’s really something we’re measuring in lives saved or potential lives saved,” Bakewell says. “If you think about those 24,000 individuals who have been removed from the highways, literally, every single one of those could have been a traffic fatality, either themselves or by causing a crash and killing somebody else on the highway.” Iowa reported 403 traffic deaths last year and authorities say more than 100 of those were alcohol-related.