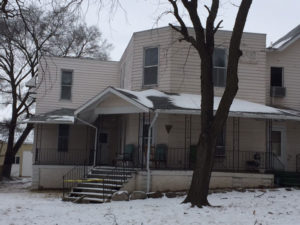 Known as Malvern Manor, it’s one of the oldest buildings in that Mills County town. It first opened in the mid-1800s as a hotel, according to co-owner Josh Heard, who says he’s had all sorts of creepy experiences in the aging structure.

“Disembodied voices, a lot of bangs, creeks and cracks all the way to shadow figures. Object manipulation, things tugging on your clothes, breathing in your ears, grabbing your arms and things like that,” Heard says. “It is literally all over this house and all the time.”

He adds, even coming in to vacuum the floors can be “nerve-wracking.” After serving as a hotel for nearly a century, catering primarily to railroad travelers, the sprawling building became a nursing home in the 1950s and in the 1970s, was converted to a group home for people with various addictions and ailments.

“Any type of mental illness you can think of, everything from people with alcoholism to the more exotic cases like multiple personalities, schizophrenia,” Heard says. “It was a very odd population of people to have under one roof.” Heard conducted his own “paranormal investigation” inside the manor and the owner later decided to sell it and Heard snapped it up.

The historic building is mostly empty today and it’s making a come-back of sorts, as people want to visit it and see if they can have an other-worldly experience of their own. “If they want a guided tour, we do offer that,” Heard says. “It lasts generally about an hour. About a half-hour of just walking through the building, getting some of the history, some of the claims of activity and then we let you do what we call a ‘free roam’ of the place for about a half-hour, 45 minutes.”

The huge building is full of twists and turns, narrow stairs, some original furnishings and lots of stories. Scattered about, you might see items that belonged to former residents as well as wheelchairs, beds, cafeteria trays and kitchen supplies. The Malvern Manor will be featured on TLC’s “Paranormal Lockdown” at 8 p.m.

(Reporting and photos by Karla James)