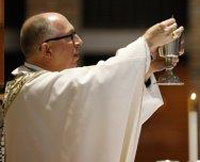 The state’s four Catholic bishops are at the statehouse this morning as legislators prepare to debate a bill that makes changes in Iowa’s collective bargaining law for public sector unions.

“The Catholic Church has a very solid and old, if you will, body of social teaching and one of those principles is the right to do collective bargaining,” Jackels says.

The bishops say it’s important to remember the benefits many workers enjoy today “are the result of negotiations between unions and management.”

“There are two cardinal or hinge principles in our social teaching and one is respect for human life and dignity and the other is the common good,” Jackels says. “This whole issue’s solidly on the foundation of the common good because it’s for the good of all, not just for the workers, and not just for the increased profit or revenue for ‘the boss’.”

“It’s the most important profession and they should have the right to bargain all things,” Jackels says.

The Republican-led Iowa House and Senate are scheduled to begin debate on the labor bill this afternoon.

Jackels says the state’s four Catholic bishops are pleased GOP lawmakers are showing “respect for human life and dignity” by advancing another bill that would no longer allow Medicaid patients to get contraceptives or reproductive health exams at clinics where abortions are performed. The bill to “defund” Planned Parenthood cleared a House subcommittee late Monday afternoon. It passed the Republican-led Iowa Senate on a 30 to 20 vote earlier this month.

About half a million Iowans attend mass at the 473 Catholic parishes in the state.