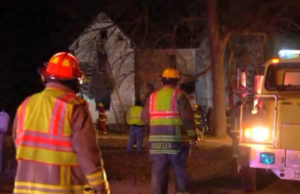 Two people died in the fire at this Keystone house.

The Benton County Sheriff’s office has released the names of two people killed in a house fire.

The fire started around 2 a.m. Tuesday in Keystone. A father and his adult son died in the fire. They’re identified as Robert and Allen Michalec.

The elder man’s daughter was injured, but escaped by jumping out of a second story window. The cause of the fire is still under investigation.