You are here: Home / News / AFP’s state director accused of failing to register as lobbyist 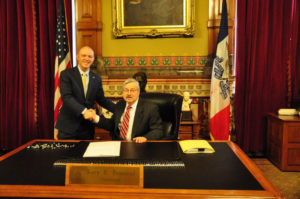 This photo of Drew Klein and Governor Branstad has drawn criticism.

The Iowa Federation of Labor’s president has filed an ethics complaint against a high-profile lobbyist for a prominent conservative group.

Drew Klein is state director for Americans for Prosperity. The group was founded and financed by the billionaire Koch brothers. Klein’s been a very public presence at the statehouse this year. He urged legislators to pass the new law that dramatically reduced bargaining rights for government workers. He testified for the bill in a public hearing and committee meetings. Klein was a visible presence in the House and Senate galleries as legislators debated the bill a week ago.

Today, the Iowa Federation of Labor’s president filed a complaint with the House Ethics Committee, charging that Klein had failed to register as a lobbyist, as required by law. Klein said in a written statement that he thought he had registered and has contacted House staff “to understand the source of the problem.”

Klein sparked controversy this past weekend for a photo he posted online. Klein asked to attend last Friday’s private event in the governor’s office for the signing of the bill that rolled back union bargaining rights in Iowa. Klein then tweeted 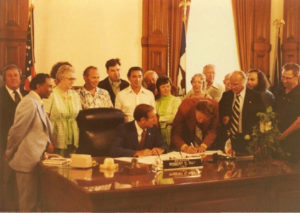 the handshake photo he took with Governor Branstad behind the governor’s desk.

This evening, Iowa Senate Democrats sent out a fundraising email featuring that photo of Klein and Branstad, as well as a 1977 photo of former Governor Robert Ray at the same desk.

It was a picture of Ray signing an agreement with AFSCME, the union that represents state and local government workers.