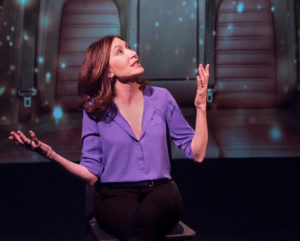 An actress and comedienne who first made a name for herself on a nationally televised cooking and comedy show is making her first appearance in Iowa today.

Annabelle Gurwitch says it’s a one-woman multimedia performance that focuses on reaching a certain age and the indignities of having hair growing in the wrong places or being hounded by AARP.

“It’s not a stand-up act, it’s a play,” Gurwitch says. “It has a narrative. It’s really one night in the life of this woman on the edge of 50, turning 50, and how I try to put all those things behind me.” The show, called “I See You Made An Effort,” is based on Gurwitch’s 2015 book of the same name, which was a New York Times best-seller.

The production is scheduled for a three-week run in Des Moines and Gurwitch says she’s packed three suitcases full of winter clothes in preparation. “I’ve got snow boots, I’ve got sweaters, but if you see me on the street in Des Moines and I look cold, it’s because I’ve lived in California for a long time,” Gurwitch says. “I think my blood’s gotten thinner. So, if you see me on the street and I’m shivering, please, people of Des Moines, buy me a hot chocolate, get me some mittens and maybe give me a warm hug!”

Born in Alabama and raised in Florida, Gurwitch has been acting since she was a teenager. The 55-year-old gained the national spotlight in 1996 as co-host of “Dinner and a Movie” on TBS. Even though she spent six years as a combination TV chef and film critic, she admits she never acquired any skills in the kitchen.

“I am the worst cook,” she says. “First of all, when I called my parents to tell them I’d gotten this job on ‘Dinner and a Movie,’ the howling laughter… My dad was like, “Shirley, Annabelle’s going to be cooking on TV!’ and my mother says, ‘What? Do they know you? Do they know who you are?'” Gurwitch’s show will be at the Temple for Performing Arts in Des Moines through March 12th.