You are here: Home / Crime / Courts / Casinos in Council Bluffs and Northwood fined for gambling violations 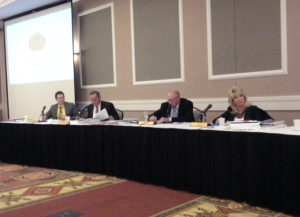 Members of the Iowa Racing and Gaming Commission at Tuesday’s meeting.

Harrah’s Casino in Council Bluffs was fined $3,000 for allowing a person who had signed up for a self-ban to get onto the gambling floor and win a jackpot.

Casino vice president, Janae Sternberg, says this case revealed an issue with their screening system. She says the casino management system is usually foolproof, but in this case the person involved moved to a different state and changed their name.

Sternberg says the person was named Smith and that added to problem as the system had to go through thousands of customers at casinos with that name. “Unfortunately it was a very common name and it did not flag on the birthdate and the last name,” Sternberg says. She says they’ve made an adjustment to check more information when someone wins a jackpot.

“We’ve implemented some additional procedures for both our casino services teams and our cage teams. Anytime we have a jackpot that’s hit they do obtain the Social Security number — but as a rule that’is put in for W-2 purposes only, for tax purposes only– so we’ve added that to our casino management system,” Sternberg says. “Anytime someone has a jackpot hit that isn’t playing with a car, we now we run that Social Security scan as well.” The casino also paid the state $16,200 dollars for the jackpot that was paid out to the person. 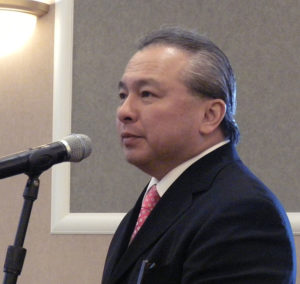 The Diamond Jo Worth Casino in Northwood paid a $20,000 fine for allowing an underage person onto the gambling floor. Racing and Gaming administrator, Brian Ohorilko, explained what happened.

He says the underage male entered the gaming floor unchallenged on November 4th of 2016 and was on the floor for more than 30 minutes and was able to gamble.

Casino vice president, Kim Pang told the commissioners they took action following the discovery. “During this process we did retrain everyone and one of the topics we talk about is: anyone under 35 we’ve got to I.D.,” Pang says. “It’s a concerted effort, unfortunately this got past one of our offices and we have retrained that teammember and are moving on, and I apologize for this incident.” The casino hasn’t had any other such violations in the last three years.