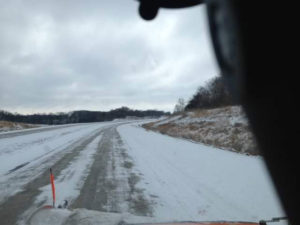 Spring is a week away but ole’ man winter sent Iowa a going-away gift of heavy snow overnight.

After record high temperatures last week in the 70s, many Iowa cities are seeing temps in the 20s today along with deep white drifts.

Meteorologist Cory Martin, at the National Weather Service, says the state’s upper third got the worst of the snowfall. “The heaviest amounts are generally up in north-central Iowa where we’ve seen anywhere from eight inches to a little over a foot,” Martin says. ”

As you go further south, it starts to taper off toward five inches or so around the Webster City-Fort Dodge area.” While Iowa’s southern tier of counties only had flurries, parts of northwest Iowa got whalloped by snow.

“Our top report so far is from one of our observers in Ringsted in Emmet County with 13 inches,” Martin says. “Our observer near the Waterloo airport measured 10.4 and we’ve also had numerous eight and nine-inch reports such as Mason City.” Warmer weather is in the forecast and Martin says this snow won’t last into the weekend.

“We’re expecting temperatures to definitely become more springlike again by late in the week,” Martin says. “Fortunately, this snow shouldn’t stick around too long. It should be good soil moisture for us, too.” The first day of spring is next Monday, March 20th.

Get your local forecast at weather.gov.