You are here: Home / News / Ernst wary of cuts to USDA food programs 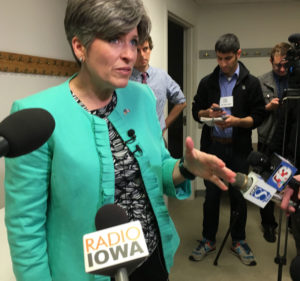 Senator Joni Ernst talks with reporters after her forum.

Senator Joni Ernst said on Friday that she’s “legitimately undecided” about the health care plan House Republican leaders have crafted as a replacement for the Affordable Care Act.

And Ernst is raising concerns about some of the budget cuts President Trump proposed last week, including a 21 percent cut to the U.S. Department of Agriculture’s budget.

“When you look at Iowa as a whole, we are a rural state, so our issues are very different from some of the other states that may have much more metro areas, I will be working, watching out for SNAP and other programs like that in the Farm Bill,” Ernst said.

Ernst talked about “SNAP” benefits — food stamps — on Friday night during a town hall meeting in Des Moines. Ernst said there are a lot of issues “nested together” when it comes to addressing poverty in rural America, including inadequate housing and lack of financing for rural businesses in addition to “food insecurity.” Drastic cuts to the free and reduced-price school lunch program would likely meet resistance from lawmakers, according to Ernst, as lawmakers craft a federal budget.

“I think we all understand that we need to tighten our belts a little bit moving forward because we are $20 trillion dollars in debt, but I think this will be a huge push for the members of the Midwestern coalition, especially,” Ernst told reporters in a news conference after the forum. “If you look at Iowa, we do have a lot of children that are food insecure and so this is something that I will be watching out for.”