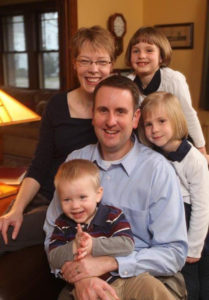 Todd Prichard and his family.

A Democrat who’s a 42-year-old veteran of the Iraq War has formed an “exploratory committee” — his first step toward officially launching a campaign for governor. Todd Prichard of Charles City is currently in his fifth year as a state representative.

“I’m discouraged with the focus of our legislative agenda and the Republican leadership right now,” Prichard said during an interview this afternoon, “and I think we need to find a new direction.”

Prichard said his goal as governor would be to help more “regular Iowans” land in the middle class.

“I don’t think that the Branstad Administration and, therefore, Kim Reynolds have addressed the real issues that are affecting Iowans across the state in rural areas and urban areas and that’s really the issue of the family budget and pocketbook issues,” Prichard said.

Prichard pointed to Branstad’s 2010 campaign promise to raise the average income of Iowans by 25 percent.

“That hasn’t happened,” Prichard said. “I’ve never seen an administration fight so hard for low-paying jobs and I think we can do better.”

Prichard is a small town attorney who also had a career in the military. That means his bio is similar to successful statewide candidates like former Governor Tom Vilsack, who was an attorney in Mount Pleasant, and U.S. Senator  Joni Ernst, an Iowa National Guard veteran. Prichard is pitching himself as someone who can provide “fresh” leadership for the state.

“I have over 21 years in the Army as an Army officer. I’ve been overseas four times,” Prichard said. “The last time I was the company commander of approximately 200 soldiers with the Iowa National Guard in Iraq and that definitely gives you leadership experience and the experience of taking care of people in tough situations.”

Prichard has assembled a team of advisors with statewide campaign experience and secured the services of key consultants who worked on President Obama’s successful campaigns in Iowa in 2008 and 2012.

A few other Democrats have expressed an interest in running for governor, so Prichard would most likely face a Democratic Primary in June of 2018.

Lieutenant Governor Kim Reynolds will soon take over as governor once her Republican colleague Terry Branstad leaves to serve as U.S. Ambassador to China. Reynolds has already raised more than a million dollars for a race for governor and has signalled she intends to ask next year’s voters to elect her to a four-year term.