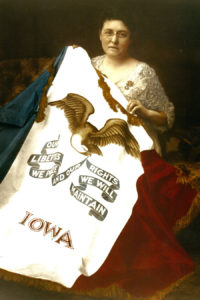 Iowa’s own version of Betsy Ross is being celebrated today for an important landmark in the southern Iowa community she called home.

Roslin Thompson, director of the Knoxville Public Library, says this date marks 100 years since the creation of Iowa’s red-white-and-blue state flag. “In 1917, Knoxville native Dixie Cornell Gebhardt designed the flag for the soldiers who were fighting along the U.S./Mexican border,” Thompson says. “The design of the flag was adopted officially in 1921.”

That first flag was carried by a regiment of Iowa National Guard soldiers. A variety of events are planned in Knoxville to mark the centennial of the Iowa flag’s design.

“We will have an official flag-raising ceremony at 10 o’clock and then at 1 o’clock, we will have a special speaker at the library, historian and author Michael Chapman, and later in the day from 4 to 6, we will have a carnival at Memorial Hall.”

“She was a state leader with the Daughters of the American Revolution,” Thompson says. “She was a longtime resident of Knoxville and was born in 1855 and died in 1955.” Tours of the Gebhardt home will be provided throughout the day.

The original flag Gephardt designed survived the war. It’s on display at the State Historical Building in Des Moines.