You are here: Home / Agriculture / Legislators moving to classify Palmer amaranth as a ‘noxious weed’ 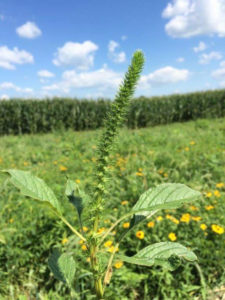 Officials say a “super weed” is invading the state and the Iowa House has voted to classify the invasive plant as a “noxious” weed.

“We’re talking about a weed that can devastate Iowa agriculture,” says Representative Mike Sexton, a farmer from Rockwell City.

Sexton says Palmer amaranth has spread to as many as 82 of the state’s 99 counties. The weed can reach seven feet in height and it chokes out other vegetation. It has spread through southern states and seems to have a resistence to common farm chemicals.

Representative Dean Fisher, a farmer from Montour, says by classifying Palmer amaranth as a noxious weed, it would be illegal to bring the plant’s seeds into the state. County weed commissioners may be more aggressive in trying to combat the invasive plant, too.

“Palmer amaranth is a very noxious weed. It’s very difficult to kill and can have very severe impacts on the production rates on crops, on the yields and so it’s imperitive that we get started on trying to eradictate this weed that’s been encroaching here in Iowa,” Fisher says.

Iowa State University experts say if Palmer amaranth gets established in a corn field, it can stifle yields by 90 percent. In a soybean field, studies show yields invaded by Palmer amaranth were cut by 80 percent.

Seeds for Palmer amaranth were mixed in with other seeds that were planted on conservation areas. Minnesota classified Palmer amaranth as a noxious weed in 2014 after it was found in two counties there. This past fall, a crew with blowtorches went through a few fields in Minnesota to burn the plants, to try to prevent the seeds from spreading.

Experts say mowing conservation ground that was accidentally seeded with Palmer amaranth can contain its spread, but if the plants have seeds, tractor tires can carry the seeds out of the prairie grass areas and into farm fields.

The bill addressing the introduction of Palmer amaranth in Iowa must clear the Senate and be approved by the governor before the plant would official be declared a noxious weed here.