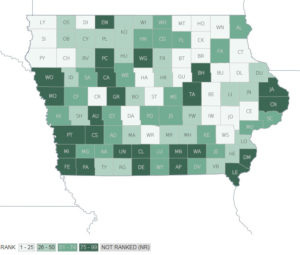 A new report ranking the healthiest places to live in Iowa finds both the worst and best ranked counties in the state are on the western border.

“In addition to measuring things like poor health days and obesity rates, we also look at education rates, we look at employment, we look at children in poverty,” Ducas says. “We want to attain a complete picture of what’s making people healthy and contributing to health where people live, learn, work and play.”

In northwest Iowa, Sioux County ranked number-one in the state for the health of its residents, while Monona County, just a few counties to the south, ranked 99th. Still, the last-place ranking doesn’t mean Monona County is a “bad” place to live, Ducas says it just helps to identify some areas where improvement is needed.

“They’re doing well when it comes to excessive drinking, they’re doing relatively well when it comes to the number of people with insurance and with housing issues,” Ducas says, “but some of those factors that are more of the predictors like high school graduation rates, college, unemployment, those are high and that tends to be the case across low-performing counties.” On the other side of the coin, Ducas says just because Sioux County ranked first on this year’s list doesn’t mean everything there is perfect, either.

“If you were to dig into a data point like children in poverty, these are kids that are born behind, and we hope, won’t stay behind, the number is very low in Sioux County, it’s 8%, but if you look at it across different population groups, you actually see for white children in Sioux County, it’s only 6% are living in poverty but 41% of Hispanic children are living in poverty.” The reports shows the five healthiest counties in Iowa are: Sioux, Winneshiek, Lyon, Chickasaw and Cedar. The five counties in the poorest health are: Monona, Decatur, Wapello, Pocahontas and Lee. Sioux and Monona counties were also numbers-one and 99 on last year’s rankings.

The study covers all 50 states and some 3,000 counties nationwide. Ducas says the rankings are designed to bring revealing data to communities across the country and the tools and resources to help them take action to improve health. See where your home county stacks up at: www.countyhealthrankings.org.