You are here: Home / News / Branstad won’t be in Florida for Trump’s summit with Chinese president (AUDIO) 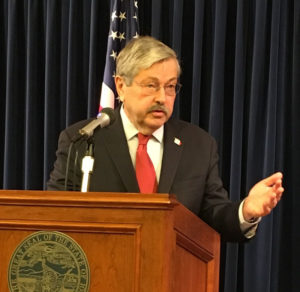 Governor Terry Branstad is headed to Washington, D.C. for meetings about his nomination to be ambassador to China, but Branstad will not make a side trip to Florida on Thursday to attend President Trump’s summit with China’s president.

“I will be going to Washington, D.C. to meet with senators and to meet the state department this week, but it would not be appropriate for me to go to Florida because that would be premature,” Branstad told reporters this morning. “I’ve not yet been confirmed.”

China’s president will meet with the president at Trump’s Mar-A-Lago estate this Thursday and Friday. Branstad is flying to D.C. today and he has meetings scheduled with members of the Senate Foreign Relations Committee. It’s the committee that will hold a hearing on Branstad’s potential confirmation as ambassador. Branstad doesn’t know yet when that hearing will happen and he’s unsure how many staff he may take with him to China.

“I need to be confirmed first. I don’t want to presume anything…There’s a large staff already there,” Branstad said. “There might be a few people I could take with me, but it’s a relatively small number.”

About 2000 people are employed at the U.S. Embassy in Beijing and the five consulates scattered across China. Branstad’s daughter, Allison, and her family will be going along and living in an embassy guest house. Branstad’s daughter is a teacher in Waukee and she’s been offered a job at the Beijing International School.