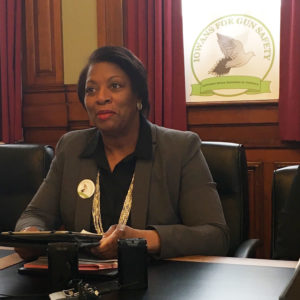 The group “Iowans for Gun Safety” is urging state senators to either reject the gun-related bill that has cleared the House in its entirety or make some major changes.

“Human rights are being overlooked for gun rights,” said Carletta Knox-Seymour, president of the board of Iowans for Gun Safety.

She spoke at a statehouse news conference late this morning.

“We’ve done a lot of work. This is not our last effort, but it is one of our stronger efforts that we hope to get something across to them,” Knox-Seymour said. “…If this doesn’t do anything, we’re geared up to go in front of the governor…This is not the last call. We are moving forward.”

The group is particularly concerned about provisions that remove a gun owner’s duty to retreat if their life or property are threatened. Reverend Erin Gingrich of the First Unitarian Church in Des Moines said those “stand your ground” provisions deserve “intense scrutiny.” 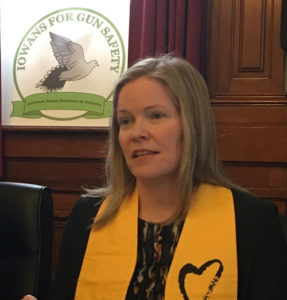 “Black people are far too often perceived as threatening simple because they are black. ‘Stand Your Ground’ gives legal sanction for racism,” Gingrich said. “We must not legislate evil.”

The group is also calling on senators to reject House-passed language that would allow children under the age of 14 to handle pistols and handguns.

Dr. Amy Shriver works at Blank Children’s Clinic in Des Moines and she has this message for senators: “Childhood firearms injuries and deaths are preventable. The pediatricians in Iowa implore you to help us do our job. Please don’t make it harder for me to keep children out of harm’s way.”

Iowans for Gun Safety has a list of things they’d not only like to see subtracted from the bill, but their list of additions includes a yearly criminal background check for Iowans who want a permit to carry a concealed weapon. According to the group, that’s not infringing on gun rights, but is a method of keeping guns out of criminal’s hands.

The bill’s floor manager in the senate recently said he’d ask his fellow senators to make some “technical corrections” in the House-passed bill, but he and others predict the major components of the bill will remain.