You are here: Home / News / ‘One Man Star Wars’ set to open in central Iowa 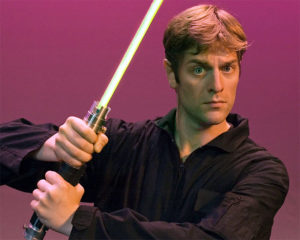 The actor who created a one-hour stage act summarizing three of the most popular movies of all time is bringing his unusual show to Iowa for the first time this week.

Charlie Ross will perform his “One Man Star Wars” using no costumes or props but he does the voices of every character in the trilogy, from Darth Vader to Princess Leia to Jabba the Hutt.

“Of course I use the accents,” Ross says. “I try my best to do an impression of the actual actors themselves as they did their voices which is easier. I don’t do a very good Yoda. My Yoda sounds like a dying goat. It’s unfortunate because people who do a better Yoda than me always, always show me how they can do a better Yoda.” Ross has been touring the planet with the show for 11 years and also performs a “One Man Lord of the Rings.” There are rare occasions, he admits, where the fantasy worlds collide.

“I find that Gollum becomes my Yoda, sometimes, yes,” Ross says. The One Man Star Wars act evolved as part of a frisbee-throwing drinking game with college buddies in Canada and Ross has made a career out of it. The native of British Columbia has logged more than four-thousand performances in 500 cities on four continents. While his favorite character to mimic used to be Luke Skywalker, Ross says he’s come to appreciate the ultimate darkness that is Emperor Palpatine.

“I can’t say that I relate to the emperor but there’s something cathartic about being able to be the most rotten, evil person because we rarely get to be that person in real life,” Ross says. “Getting your inner evil on and being able to just enjoy being a rotten person is kind of a lovely thing.” In a “Saturday Night Live” skit decades ago, the hero of a different sci-fi series got fed up with relentless questions from rabid fans and told them, cruelly, to “Get a life.” Ross says he’d never echo William Shatner’s infamous line putting down “Star Trek” lovers, as Ross says he’s one of those same fanatics. He calls himself a “professional geek.”

“There’s a geekiness that’s part of who I am,” Ross says. “The more people that are there that have geeky observations or they want to talk geek, I’m fully for it. That is who I am.”

The show opens Tuesday and runs through Sunday at the Temple Theater in Des Moines.