You are here: Home / News / Clive wins ‘River Town of the Year’ after Walnut Creek revival 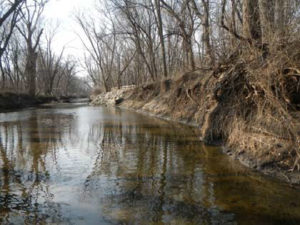 The nonprofit group Iowa Rivers Revival (IRR) has named the Des Moines suburb of Clive as its 2017 Iowa “River Town of the Year.”

IRR executive director, Molly Hanson says the award is based on the work done on Walnut Creek that runs through the community.

“This is actually our first creek to win our river town of the year award, but it really has more to do with the city’s priorities,” Hanson says. Hanson says they actually did some research on the issue for the 10th award, knowing they might get some questions about naming a city with a creek as the top river town.

“In terms of actual definitions, which is funny, creek and river aren’t formal definitions of flowing water bodies, they are all classified as streams. And then we give them nicknames depending on how big or small they are,” she says. Hanson says the various things the city has done or is planning to do to stabilize and improve Walnut Creek have made it a draw.

She says the community has turned into a “recreational Mecca” with the greenbelt and the bike trail along the creek and then they also are planning some things like oxbow restoration and wetland restoration. Hanson says the size of the stream doesn’t matter, but the effort to improve its quality in a way that makes it a centerpiece in the community is key.

“So you’re not just seeing rip-rap all the way along the side of the bank — but native plantings and vegetation and some sort of unique features in stream that may be quite subtle, but are improving water quality and habitat,” Monson says.

Clive has a population of about 17,500, and is about one mile wide and eight or nine miles long, with Walnut Creek running through the center of much of the community.